Florian Olivier has been a sport and mountain enthusiast since a very young age. Wishing to work in wide, open spaces, he is today manager of the Maison de Tourism in Pilat. After a successful athletic career, where he played at the national level, today he dedicates himself to trail. 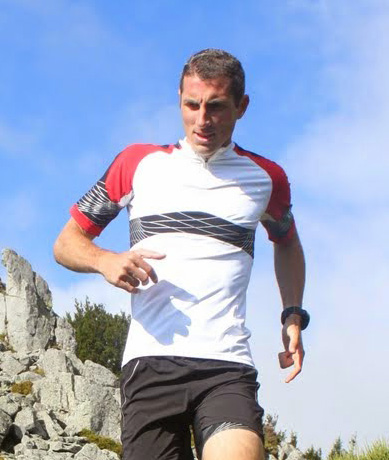 In 2013, he had his first success with several podiums and triumphs in competition. In particular, through the French championships of orientation trail racing clubs where he won the title of the Vice-Champion of France by team in the National 3 in 3h54min04 sec. Afterwards, on the occasion of the Etoiles de Gimel, (22 km / 56O D+), by arriving 1er in 1h41 minutes, where he repeated his win in 2014, over the 32km (1000D+), in 2h35 minutes.

In 2014, Florian Olivier secured the 11th place for his first Vercors ultra-trail.

Since, he continues to clock up the kilometres and the metre drops and is ready to conquer new summits equipped by CimAlp.

To this day he has completed, amongst others, the Aiguilles Rouges trail in 2013, which was his first real big mountain race: 50 km and 4 000 metres of ascending elevation!

« The race is just a succession of magnificent memories: a majestic sunrise over Mont Blanc from the Brévent and passes at more than 2 500 m altitude in the wild mountains! That race, completed with two friends, clearly shows that despite the fact that trail is an individual sport, the sense of a team is very present. My most wonderful memory will remain the feeling of fulfilment, alone with one’s steps below the Brévent, in the early rising hours and the chamois taking possession of the slopes. The mountains are really beautiful! »

The same year, he ran the Saintélyon, that is without doubt «the longest nature race in the Rhône-Alpes region and perhaps even in France!  It is only when arriving at the starting line that one realises the crowd is enormous! I wanted at least once in my trail career to confront that legendary challenge and chose to do it at the 60th anniversary of the event.